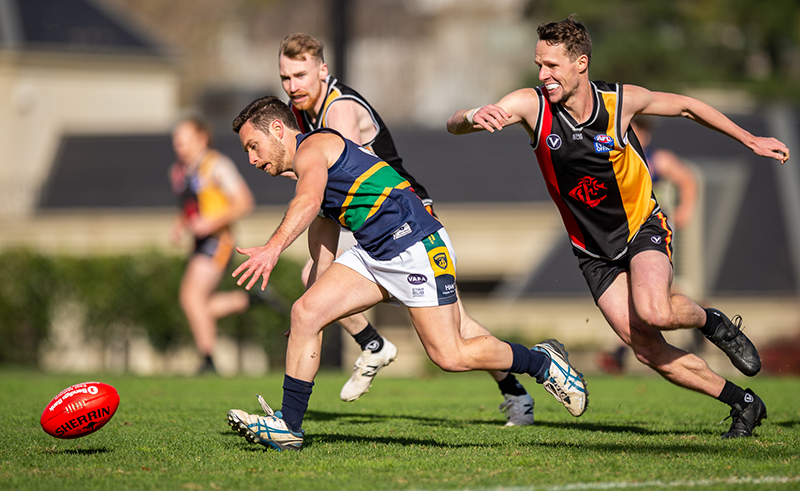 A fierce and fiery rivalry is brewing between Emmaus St Leo’s and Hawthorn as the latter claimed a four-point victory in a thriller at Bennettswood Reserve on Saturday. The Animals burst out of the gate and kicked five goals to one in the first quarter before the Hawks gained control in the second, snagging six majors and limiting their opponents to just one to take an 11-point lead into the main break. The second half would continue to be an arm-wrestle subtly leaning in Hawthorn’s direction until an Animals goal saw them in the lead with minutes to go, before the Hawks wrangled it back to hold on in a final term that was not for the fainthearted. Justin Raiti was a clear standout for the winners with three goals and Luke McLeod found plenty of the ball. Matt Hill (3) starred for Emmaus St Leo’s, as did Lawrence Virgo (2) and Harry Davis (2), while Jonathan Greensides (1) took top honours.

North Brunswick had ten individual goalkickers on the weekend as they systematically dismantled Albert Park by 157 points at Allard Park. It’s hard to know which part of the game hurt the Falcons more as they went scoreless to the Bulls’ 13.14.92 at halftime, before finishing the game with two of their own goals on the board from Brett Tottenham and Daniel Young. Marcus Watt (2) was named best on for North Brunswick, while seven of his teammates were multiple goal scorers – with Rhys Mehlstaubler (4), Patrick Notaro (4), Keary Mourelatos (3), Jake Notaro (3) and John Tucker (3) all getting on the board in a big way. For Albert Park, Alistair Lupo took top honours in a disappointing day for his side. On a brighter note, the Falcons claimed their first reserves victory of the season.

Parkside suffered their second loss of the season when they travelled to Kevin Bartlett Reserve on Saturday. The Snakes got out to an early lead in the first quarter before the Red Devils got back within ten points going into the halftime break. Only two goals were scored in the third quarter and they were both for Richmond Central, giving Parkside some work to do in the final term. The Snakes held onto the lead despite a five-goal to three quarter, bringing about their fifth win of the season. Jake Munro and Jack Bilson both kicked three each for the home side to keep them close to the top of the divisional goalkicking tally, while Matthew Lammeretz named their best. In Simon Mackie’s absence, Shane Doherty (3) and Jai Swainger (2) were the Red Devils’ only multiple goal scorers as Michael Romano (1) took top honours.

It was a game of serious lead changes when Canterbury made the trek to face Westbourne Grammarians at Westbourne Grammar. An 18-point lead to the Warriors at quarter-time quickly turned into a 29-point deficit by the main break as the Cobras piled on seven unanswered goals. It was then Westbourne’s turn to snag six goals while keeping their opponents goalless as they took a slight buffer into the last quarter. The Warriors eventually got up by 22 points at the final siren. The home side had nine individual goal scorers, with Leigh Reddrop (2) taking top spot on the best players list, and Ali Eqbal, Ben Johnson and Kelsey Rameka all kicking two each of their own. For the Cobras, Thomas Lowden kicked three, Arun Panjwani two, while Ben Jose (1) took top honours.