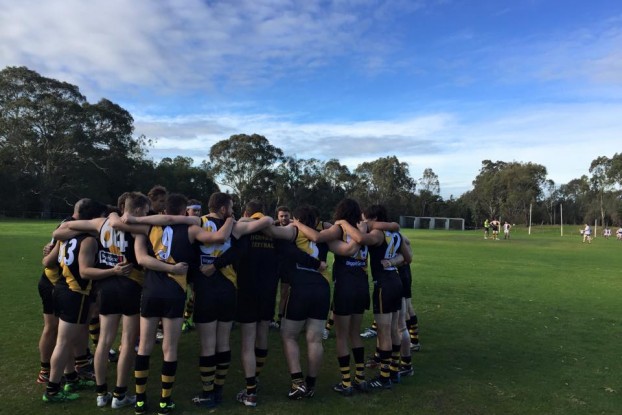 Old Scotch website after their 22-point loss to Beaumaris

The Cards were back at home after their first loss of the season hoping to make amends for a missed opportunity against a red hot Trinity. Not to lose two games in a row was a very important focus. Beaumaris based on past results appeared to be struggling however this was not the case with them having been extremely competitive in every game to date and always a fierce competitor.

The conditions were quite blustery and that showed with a scrappy start to the game. Beaumaris kicking with the wind in to start with however much of the attacking was done to the pavilion end by the Cardinals. The first quarter certainly didn’t provide many highlights as both sides failed to make an impact on the scoreboard, both having several opportunities. (Read More)

University Blacks website after their 21-point win over Old Trinity

Watching the senior team over the last couple of weeks, there have been some positive signs although results haven’t fallen the right way. But on Saturday out at Bulleen, after some hard work on the training track and a renewed sense of belief, the Blacks commemorated Huw Lacey’s 150th game for the club with an 18-point win against top of the ladder side Old Trinity.

After Lace led the boys onto Daley Oval, the Blacks kicked with the wind in the first term and started in lively fashion. Jordan Quaile in particular seemed intent on terrorising the Old Trinity defence with his defensive pressure and agility and looks as though he has taken his game to the next level this year, building on some impressive late-season showings in 2014. (Read More)

Collegians website after their 5-point win over University Blues

On Monday morning I woke up with a spring in my step thinking we could take a scalp. Friday morning I saw the side decimated from the previous week and I thought we were up against it. But driving to the ground I knew we would give a good account of ourselves, the coaches would prepare well and the new players wouldn’t give two hoots about reputations. It didn’t take long to find out we had come to play.

On a great deck in front of a pro Blues crowd, the Blues started with a four goal wind at their back and right from the outset it was a real arm wrestle (Read More)

Hampton Rovers website after their 60-point win over Parkdale Vultures

Hampton Rovers defeated local rivals Parkdale Vultures by 60 points on Saturday at Boss James Reserve in a replay of last year’s Grand Final. While the Rovers went into the game following three straight defeats, the fact these losses were against sides very likely to finish the regular season in the top three meant the confidence and atmosphere in the rooms pre-game remained high.

The first half was a complete arm-wrestle with the visitors getting numbers around the ball. They kicked with the wind towards the David Street end in the first quarter and kicked two goals to one. Neither side could score freely and in the second term, despite having the majority of the play, Hampton failed to post anything significant on the scoreboard. (Read More)

Old Ivanhoe website after their 45-point win over Oakleigh

The firsts travelled to Oakleigh for an encounter of great importance to both sides. For Oakleigh, a win would result in a positive win / loss ratio and a high position on the ladder, whilst for OIGFC, the opportunity was for a chance to consolidate a position in the top 4 and put a gap between us and the sides lower on the ladder.

The game opened with Oakleigh kicking with the aid of a blustery wind. The team started well and dominated the early contests. Although we kicked the opening goal through Carl Groth and enjoyed a handy 10 point break against the wind, Oakleigh responded quickly to set up an early lead. Oakleigh brought its traditional hard, physical game to the contest and unfortunately Liam Oliver who had been prominent early, was a casualty, suffering a heavy knock. At quarter time Oakleigh 5.2.32 led OIGFC 3.3.21, by 11 points. (Read More)

St. Marys Salesian played a classic last quarter to record a sensational ‘come from behind’ victory over Whitefriars Old Collegians by 10 points in an absolute thriller at Whitefriars College, Donvale. Whitefriars kicked to the southern end (favoured by the breeze) in the opening term. A swirly wind in the centre of the ground made it difficult for both sides to settle and it was a scrappy game with lots of skill errors early. After about 15 minutes, the Friars adapted to the conditions and played the sharper footy. SMS made many unforced errors and looked low on confidence after two recent losses. Winning in the midfield Whitefriars were able to kick four goals, but the Saints stayed in touch with majors by Louie Holmes and Manny Dolan. At quarter-time, the Friars held a 14 point advantage.

Heading into round 5 with the ledger squared at 2 wins and 2 losses, the strongest Snakes outfit for the season took on St Johns down at the Snake Pit. With the wind swirling all over the ground giving the south end a distinct advantage, the Snakes won the toss and kicked with the wind scoring 6 goals, but JOCs showed that it was possible to score into the breeze slotting 4 majors themselves in the first quarter. Hegarty made his way back into the snakes line up for the second time this year, causing all sorts of headaches for the opposition running off half back, and the snakes lifted with his presence.

The second quarter was a big battle, and only a few red time goals with one after the siren for the visitors had the half time margin more than what it deserved. The snakes went into the main break 13 points down and in a very handy position. (Read More)