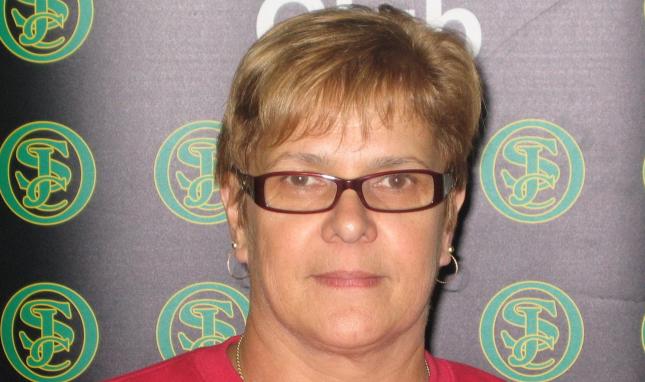 At the start of the week the VAFA requested nominations from the clubs to acknowledge the work of the women that often don’t get the kudos they deserve. We received multiple independent nominations for Chris Swinburne at St Johns.
Chris is the club Secretary and almost everything else at the club this year except pulling on the boots and lining up on the ground at 2pm on Saturday.
Chris has been acknowledge by the VAFA before when she won Administrator of the year in 2010 – when she first commenced as club Secretary – but that does not stop us from doing so again.
Chris was also awarded the coveted St John’s Best Club Volunteer in 2011.
This year alone Chris has raised the bar again, organising and sometimes cooking the Thursday night meal for the boys and running the canteen operation on game day are just the start.
Its not all about the food either, Chris is also on the administration team for the St Johns women’s team in the VWFL – how appropriate for Women’s Round – so is across the ins and outs of two different leagues.
Chris is highly valued by the coaches for her ability to disseminate information rapidly and efficiently and is also a key mentor to players and coaches alike at the club on football and non football issues.
There isn’t a training session, a game or a club function that Chris has missed, not just attends but is actively doing something.

Behind the scenes there are fees to be collected, jumpers to be washed, complaints to be heard, correspondence to be attended to, minutes to be taken and distributed.

A member of the committee at St Johns since 2009, when she also was team manager of the club’s under 18 side, this year is the Reserves.
For Chris the highlight so far was last year’s Division 2 premiership, with the club struggling in Division 1 this year, let’s hope more success is around the corner for St Johns Old Collegians Football Club.