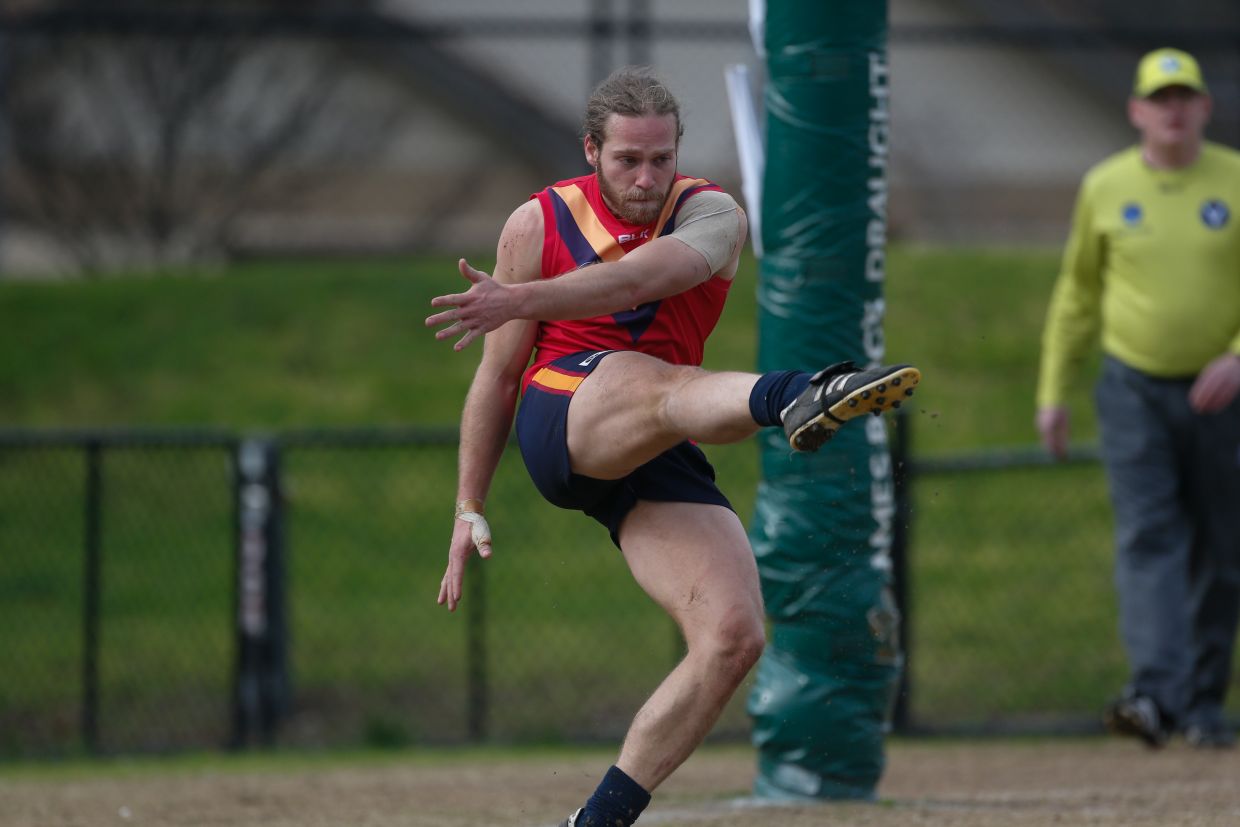 Who will join St Bede’s in William Buck Premier?

Four teams entered the battlefield that is Premier B finals footy and only three came out the other side. Well done to St Bede’s/Mentone who were the first to claim a Grand Final berth as well as a spot in the William Buck Premier section in 2017 with their 27-point win over Beaumaris. They will be joined by either the Sharks or Old Scotch after the Cardinals came from behind in the last quarter to hold off a determined Monash Blues unit by seven points.

Beaumaris (1st) v St Bede’s/Mentone (2nd)
Both Beaumaris and St Bede’s/Mentone had similar paths to the finals. After being relegated from Premier section, the Sharks wasted no time indicating that they fully intended to climb back up asap. They went undefeated through the first half of the season, with a draw against Fitzroy their only blemish. Although they were tested several times in the later rounds, they never dropped out of the top two and finished up the top of the tree. The Tigers got off to a slow start with a couple of early losses, but seven wins in a row through the middle rounds catapulted them into the upper echelons and they spent the second half of the season in the top two, trading places with Beaumaris. Their four point loss to Monash in Round 18 meant they relinquished the minor premiership. The two sides first met back in Round 4 and the Sharks took a six goal win, but the Tigers got their revenge in Round 11 snatching a one-point heart-stopper.

Chris Richards got the Tigers off to a great start after a blistering tackle from Michael Barnes allowed the ball to spill out and he finished it off. Beaumaris had the next three scoring shots but couldn’t find the big sticks, and the Tigers joined in with a couple of behinds of their own. Drew Kelly finally broke through for the Sharks, finishing well after Daniel Gribbin crashed the pack and Sam McBain put on a nice spin move. Patrick Hurst replied for the Tigers a couple of minutes later, a neat little sidestep allowing him space to finish a nice goal on the run. Alex Smout took a strong contested mark and converted the set shot, giving the Tigers a two goal lead at quarter time.

The second term was all Beaumaris, although they once again took a long time to find the goals with misses from Lachlan Boyd, Gribbin, Matthew Petering and Josh Ward. McBain finished off a chain of handballs at the 18-minute mark and was soon followed by goals from Gribbin and Milne as the Sharks kept the Tigers goalless for the quarter and took a ten-point lead into half time.

Jaryd Robertson scored first for the Tigers after the break and Beaumaris added another couple of behinds before Gribbin took a strong contested mark and scored the Sharks first, extending their lead to two goals. The Tigers fought back with goals to Erish Uthayakumar, Paul Wintle and Barnes, restoring the lead, before a late goal to Stephen Milne made it a one-point game at three-quarter time.

The scoring end to this point had been the City End, and the Sharks looked to continue that trend when they found Milne one-on-one in front of goal twice in the first five minutes and he kicked goals both times, giving Beaumaris the ascendancy. However, the Tigers managed to reverse the momentum, starting with a great tackle to Barnes who was rewarded and converted the free kick. George Rowlands and Uthayakumar followed soon after, but a Milne goal halfway through the term brought the margin back to three points. In the end the Tigers finished with a rush, with goals to Barnes, Robertson, Josh Cowan and Uthayakumar in the last ten minutes allowing them to run away with a 27-point win and, as a result, a week off, a Grand Final berth and a spot in William Buck Premier.

Old Scotch (3rd) v Monash (4th)
Old Scotch and Monash might have finished with the same win-loss record, but they got there in very different ways. The Cardinals spent the first half of the season in the top two, but five losses in six games late in the season saw them having to fight for a finals spot. Premier B newcomers Monash lost their first three games and were cellar-dwellers early on before eight wins from their last ten games saw them barge into the top four in the second half of the season. However, they weren’t the only ones, and found themselves needing to beat top team St Bede’s/Mentone in the last round to progress to finals action. The Blues got up in a four point thriller, ensuring fourth place and a sudden-death elimination final against Old Scotch. The season series is tied at 1-1. Old Scotch won their Round 2 encounter by 41 points before Monash squared the ledger in Round 13 with a two-point victory.

Much like the game the previous day, both sides took a long time to find the goals and it was the team wearing blue who struggled the most, with Monash adding three early behinds before Tim Macmillan nailed a set shot from the boundary to open the Cardinals account 17 minutes into the contest. Max Van den Broek added another one a minute later before Andre Headberry took a ‘speccy’ and converted the set shot for the Blues. Van den Broek marked a Monash kick-in and kicked a late goal, giving the Scotchies a ten point lead.

The second term was an even contest, with the Old Scotch lead remaining in single-digits for most of the time. It was goal-for-goal early on, with Nick Cox taking a contested mark and kicking truly in between goals to Nick Petering and Macgregor Cameron. James Sansom marked from a Monash kick-in and slotted the goal, but a late one from Nick McConville brought the margin back to three points at half time.

Scoring dried up in the third quarter, with just three goals kicked and the last score for the quarter was at the 17-minute mark. Jono Daggian was rewarded for a great tackle at the top of the goal square. Lachlan Byrne-Jones drew the ire of the Monash fans when he dropped a simple mark in his defensive area, allowing Cameron Pither to pounce and get one back for the Blues. Hayden Calway took a contested mark and nailed the set shot, giving the Cardinals a two goal lead.

I had to leave at three-quarter time and even though OId Scotch seemed to be in control, I had a feeling I’d probably miss the best quarter of the match. As both teams entered the final term playing to keep their season alive, the intensity and tempo lifted and the small crowd came to life. Monash found an extra gear and kicked the first three goals of the quarter through McConville, Maddison Hardiman and Liam Darcy. At the 26-minute mark, Old Scotch hadn’t kicked a goal and the Blues had the lead and all the momentum. However, there was another twist in this tale when James Bowden marked inside 50 and nailed the goal, bringing the scores level. A couple of minutes later Ben Whitfort was caught holding the ball in the backline and Daggian kicked truly, somehow giving Old Scotch the lead. Sansom kicked a point at the 30-minute mark and the Cardinals had put the game out of Monash’s reach, ending their season and setting up a Prelim final showdown with Beaumaris.