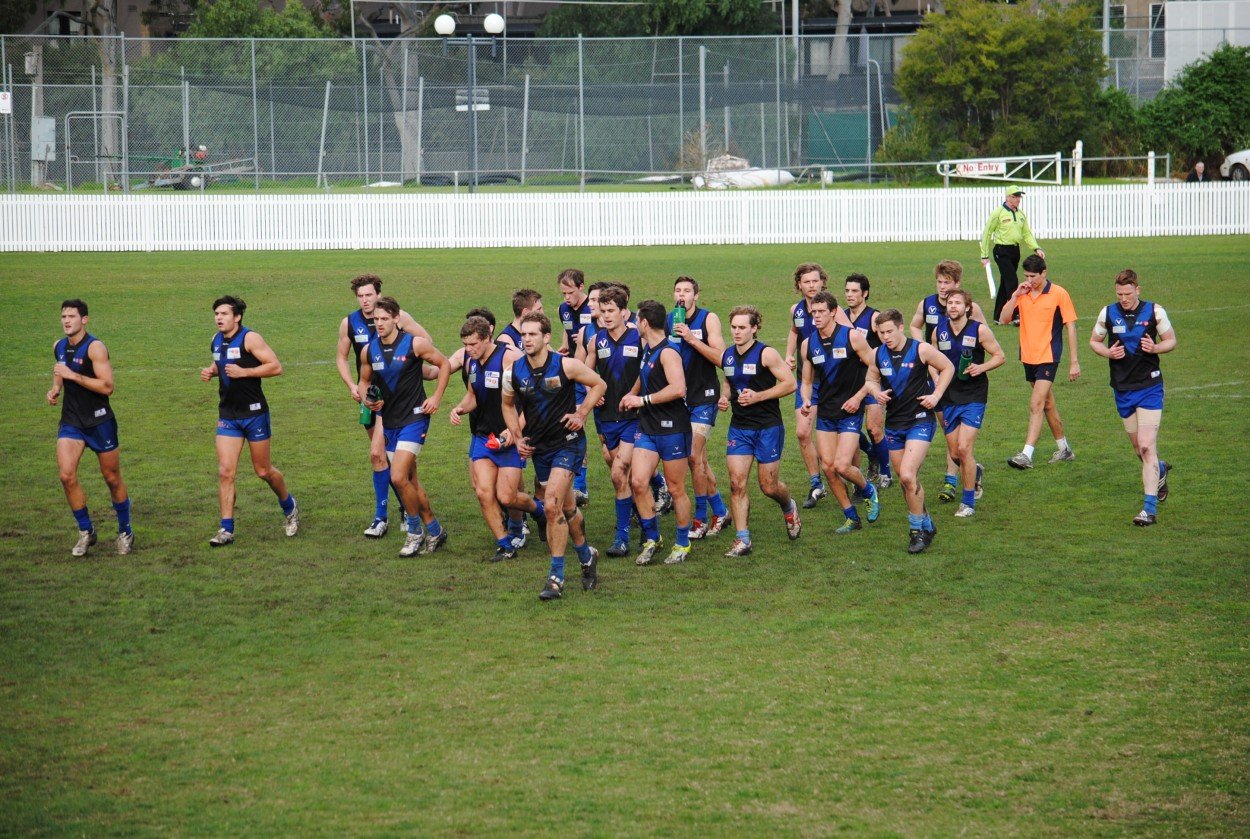 WOULD A UNI BLUES CHALLENGER PLEASE STAND UP

At the halfway point of Premier B, University Blues have demonstrated to the rest of the competition their intent for the year. With the exception of a surprise loss at Old Ivanhoe in Round 4, Blues have put every other side in the section back in their box after a ruthless two hour demolition job.
Last Saturday, Uni Blues put third place St Kevin’s to the sword their nearest challengers Old Carey fell at AJAX. So who is most likely to challenge Blues this year?
In recent years, Premier B has been one of the most competitive sections in the VAFA. Not so this year. Quinton Gleeson’s arrival as coach has seen a brutality arrive in Premier B of the like we haven’t seen for some time.
Uni Blues’ average winning margin is a staggering 88 points per match. When you consider their average points for this year is 125 and average points against is 48 it’s not hard to see how. If you haven’t looked at the ladder that equates to a percentage of more than 262.
At first glance, the Blues’ firepower doesn’t seem overly impressive. Pat Gardiner has 21 goals for the year, which is fifth in Premier B. The next best Blue is Tom McKenzie with 16. However, it is the overall spread of goals that would have Gleeson smiling and opposition coaches fretting about who exactly to send their best defenders to? Of the 29 players they have used this year, 22 of them have kicked a goal in the opening nine rounds and only 3 of that 22 have a single goal.
They share the ball like no other team and they share the load too. Their skipper and regular goal kicker in past seasons Jack Watts, has not booted a major this year. Watts has been playing at centre half back and with the way that he and other players yet to split the middle (Gus Ford, Hugh Vickers-Willis and Llewyn Butler) have been holding teams to an average of just 6-8 goals a game there is no obvious need for Watts to venture forward of centre.
So that leaves the rest of the competition. Old Carey have a narrow hold on second spot but the Panthers have dropped games perhaps they shouldn’t, the loss at Caulfield more surprising than the loss to AJAX. Old Carey have a reasonable spread of goal kickers but their defence is leaky conceding 89 points a match.
Three rounds ago St Kevin’s were on a good run and looked like being the main challengers, but SKOB have now lost their last three matches. They certainly matched, if not topped Blues for much of the opening quarter but they couldn’t convert their chances. St Kevin’s too, have issues in defence and despite being just inside the four, they have conceded the third most points in the section.
AJAX are either hot or not. Their running game is a sight to behold but like Old Carey have fallen over in games where they probably shouldn’t have. The Jackers certtainly have the best two forwards in the comp, but that can also be a shortcoming. Stop Lew and Fayman and you are on the way to stopping AJAX. AJAX also troubled Blues the most of the other top four challengers, however the Jackers still lost by 51 points.
Fitzroy have jumped out of the pack and find themselves at their loftiest ever position in the club’s history. Currently third, the Roys have quietly gone about their business to creep into the four. Fitzroy are a competitive beast and if they keep netting wins like their gutsy performance at Old Melburnians on the weekend they could be a threat come September.
Of the rest, only Old Ivanhoe have troubled Blues, but they are struggling to trouble too many others. The Hoes need to win against the teams around them before considering doing any damage against Blues later this year.
The season is by no means over and anything can happen in September, but Uni Blues are giving themselves the best possible chance to return to Premier a better side than when they left.