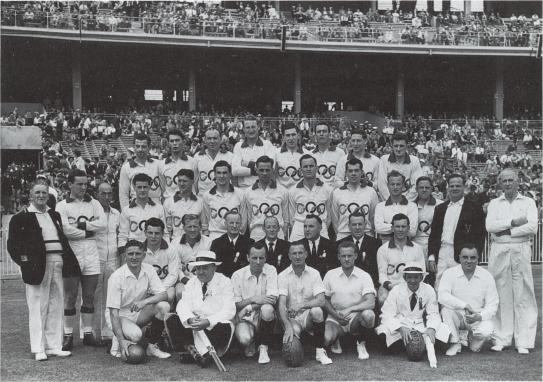 AUSTRALIAN FOOTBALL ON THE OLYMPIC STAGE

Australia’s gold medal haul is not going that well in current 2012 Olympics but in 1956 it was a different story as Melbourne hosted the Olympics, the first city to do so in the southern hemisphere.
The world’s eyes were turned on Melbourne and Australia for what became known as the friendly games.
Despite that fact that all equestrian gold medals had been run and won in Stockholm a few months earlier, all other competition got under way in Melbourne in November 1956.
Whilst the games will be remembered for Australia’s dominance in the pool – we won all freestyle gold medals – and the water polo between Hungary and the USSR that became a blood bath, we like to think that an indelible mark was left upon the visiting world when a match of Australian rules football was played as a demonstration event at the MCG.
On 7th December 1956, a combined VFL and VFA team and a VAFA team played in front of a smallish crowd on the infield of the MCG athletics track, immediately after the “bronze medal” soccer match between Bulgaria and India had finished.
How many international visitors witnessed the occassion is unknown, but VAFA Secretary Jack Fullerton spent the game seated next to HRH the Duke of Edinburgh explaining the intricacies of the game.
Most importantly the match was won by the VAFA 12.9.81 to 8.7.55 which surprised all but the VAFA faithful who knew the skill and strength of their own players.
Perhaps the VAFA were assisted by the selection criteria which prohibited the best players from the VFL and VFA from playing as they were professionals.
The Olympics was still very much an amateur competition and these ideals were strictly adhered to so only amateur players could be represented.
Of the players on the combined side many were former VAFA players themselves who had maintained their amateur status.
A list of the VAFA side is below and as you will see the team contained some true champions of the amateur game.
Coach: J.W. Kelly (coach)
Players:
Collegians: Geoff Hibbins (Captain)
Old Melburnians: Murray Mitchell (Vice-captain), Duncan Anderson, J.N. Hannan, W.B. Thomas
University Blacks: A.G. (P) Capes, G.J. Gill
University Blues: J.R. Hayes, M. Keogh
M.H.S.O.B.: R. Collins
Commonwealth Bank: G.W. Empey
Ormond: Dick Fenton-Smith
Old Scotch Collegians: P.K. Harkness
Coburg Amateurs: I. Merrick, R.F. Pettigrove, P. Rochow
Old Paradians: L. J. Wakeling
Ivanhoe Amateurs: L.E. Williams
Reserves:
Powerhouse L. Grant
Old Scotch Collegians: R. Tindale
Emergencies:
State Savings Bank: D. Douglas
Ormond: J. Byrne
Old Scotch Collegians: P. Craw