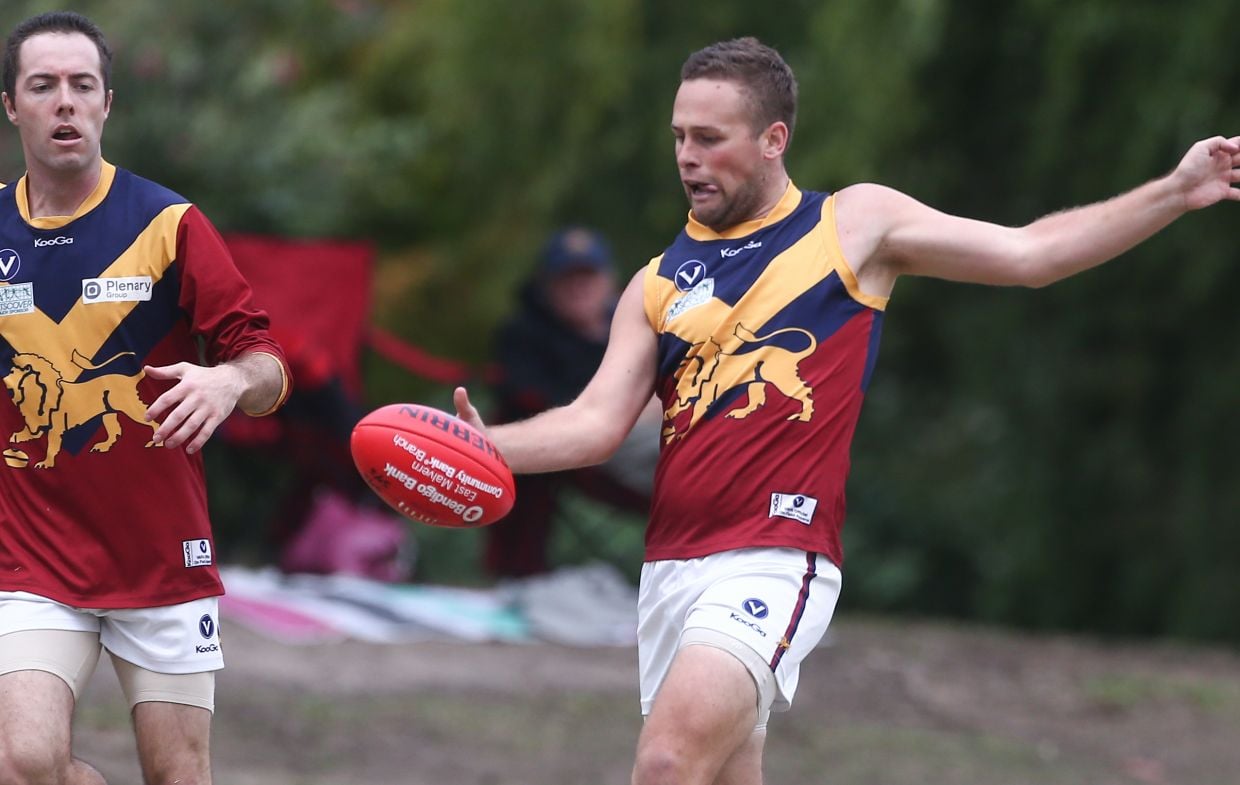 Division 1 has been full of excitement and surprise in season 2016 and Round 5 certainly didn’t let us down. Fans across the competition were treated to skilful displays in all five games, with high-scores aplenty. The story of the round was undoubtedly Brunswick NOBSPC, who got their season back on track with an upset win over premiership contender Therry Penola. While the Saints got back on the winners list, PEGS held on at home, Old Mentonians had their biggest challenge for the season and the Friars producing a goal-scoring blitz.

We’ll start at Alec Gillon Oval where NOBs, the same side that went down by over 150 points in Round 1, held on to defeat a fast-finishing Therry Penola in front of a big home crowd for Ladies Day. Brunswick NOBSPC started like a house on fire with a play on at all costs mentality, but was unable to make the most of their opportunities in windy conditions. The middle stages of the game were fiercely contested as neither side gave an inch. NOBs were clear favourites at the final break, holding on to an 18-point lead, which was extended to 31 points early in the last. However, the Lions never go down without a roar. Therry came home strongly, but couldn’t quite edge themselves over the line, falling short by eight points. Defender Chris Ford ran the ball out of defence all day and was a clear best on ground, Kyle Docherty was brilliant again kicking four majors and skipper Lachlan Ezard was back to his tantalising best. For Therry, Hayden Rowe was a standout and Jarrod Bannister led the late charge for the Lions finishing with four goals to his name.

St Mary’s Salesian responded to their massive loss in the best possible fashion, accounting for Ivanhoe by 27 points. Considering both sides patchy form it was a difficult game to predict, but thanks to an emphatic final quarter the Saints were able to run over the top of the Hoes, who will be bitterly disappointed after controlling the contest for a large portion of the game. Saints co-captain Heath Chipperfield pleaded with his troops for a strong last quarter and pointed out that the wind shouldn’t be a factor. His charges certainly didn’t let him down. A little bit of individual brilliance from Gary Puruntatmeri proved vital for the Saints as he snared a bag of five, while Karl Kaldawi was able to do the same for the Hoes. Charlie Angley, Tim Dudgeon and Michael Dolan were all valuable contributors on a day where the Saints simply fought harder when it mattered.

In windy conditions at The Runway PEGS utilised their home ground advantage to hold on and defeat Old Geelong in a gripping contest. PEGS went into the game with a few key outs, but were able to come together and play their best footy for the season. The wind played a massive factor throughout the match and PEGS certainly made the most of it racing to a 45-point quarter time lead. The Ogs continually responded when it was their turn to have the wind, but unfortunately for them they were not as clinical in front of goal. In total 23 of the 28 goals scored were to one end of the ground. Tylar Vujanic kicked five in his first hit-out for the season and milestone man Trent Skurrie rammed home four for PEGS. It would be remiss to not mention the Ogs acquisition of former Geelong AFL footballer George Burbury who has committed to the Ogs. He kicked three majors on the weekend and looks set to produce headaches for opposition across the league.

Old Mentonians had their tightest contest of the season thus far, yet still ran away convincing 47-point victors. Prahran-Assumption who was coming off a 102 point less to Old Geelong can certainly take some merit from this defeat, considering the Panthers smallest winning margin prior to the weekend was 110 points. It was a much-improved performance from the Two Blues who fought hard all day, but were blown away by a burst of five goals in seven minutes to begin the second term from the Panthers. The Two Blues will look back on the second half and take many positives considering they only trailed the all-conquering OMs by 10 points for the half. For Prahran-Assumption on-baller Matt Wall was back to his best, young guns Jordan Waters and Jayden Williams had a hand in many goals while John Robbins and Jack Matherson each kicked three. Panther Luke Hull shot himself to the top of the goal-kicking tally and his now followed by Darcy Brown who kicked four to bring his tally to 18 for the year, one behind Hull. Angus Hill and Billy Chapman were two standouts on another great day for the Panthers.

Whitefriars put in a clinical performance against the bottom-placed Old Paradians, scoring 24 goals to 17 and using the wind to their advantage beautifully. The Friars lead 80 to 39 at the main break and extended their lead to 60 points at three quarter time. Michael Nitas continued his brilliant form kicking five and being named best on ground, Ciaran Hickey added four to his tallyand Ryan Malt put forward a quality four-quarter performance. For the Raiders prized recruit Adam Pattison excited the travelling fans with his best performance for the year, nailing four majors four majors and Michael Boundy was a clear standout going home with a haul of six next to his name.

As I think will be the case all season round 6 is another tipster’s nightmare with crucial games all over the board. Old Geelong should be too strong for NOBs at Como Park, Prahran-Assumption will be looking to build on their positive performance away against Ivanhoe, Therry simply need to bounce back against the Raiders and Old Mentonians may have a fight on their hands against the ever competitive Friars. The match of the round sees the Saints host PEGS. This is a crucial contest for St Mary’s as they are yet to assert themselves fully in Division 1. I’m tipping PEGS to continue their strong form and get over the line… just!

All the best for another cracking round of VAFA footy.