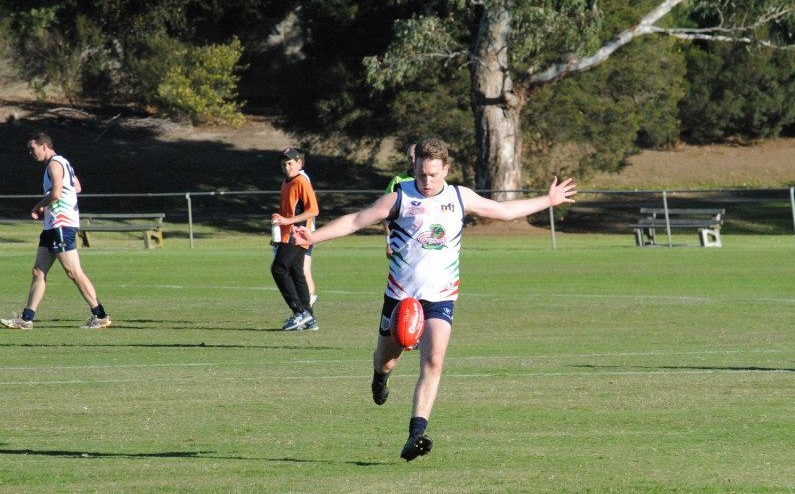 Westbourne Grammarians remain undefeated after they outlasted Box Hill North and defeated them by 45 points at Elgar Park. Adam Imber received his second consecutive best-on-ground nomination, while Dale Collins snagged three goals and took his four-game tally to 18 for the Warriors. Daniel Penny and Thomas Mitchell kicked two each for the winless and eighth-placed Demons.

Manningham Cobras had their most impressive win for a few years, destroying Chadstone by 192 points at Koonung Reserve. 61 scoring shots to nine told the story of the day’s proceedings, with the Cobras rarely challenged on their way to the mammoth victory. Christopher Jolly was the main recipient up forward, with his 12 majors the highest of any section this season. Jake Farrugia kicked two for the Synners.

Point Cook solidified third place on the Division 4 ladder with a 26-point come-from behind victory against Mt Lilydale at Saltwater Reserve. In a battle between two top four sides, the Dogs came from 21 points down at quarter time after the Rams failed to take their chances, kicking 2.9 in the first and 7.15 for the match. Will Dawson made it 16 goals from four matches for the Dogs with a bag of five, while Adam Thorne was the Rams’ best.

North Brunswick charged to second spot on the ladder with a strong 47-point win against Eley Park Sharks at Whitehorse Reserve. Leading by 16 at three quarter time, the Bulls piled on eight to three in the final term to run away with the win. David Viola kicked five for the Sharks and Will Croagh was far and away the best on the field.