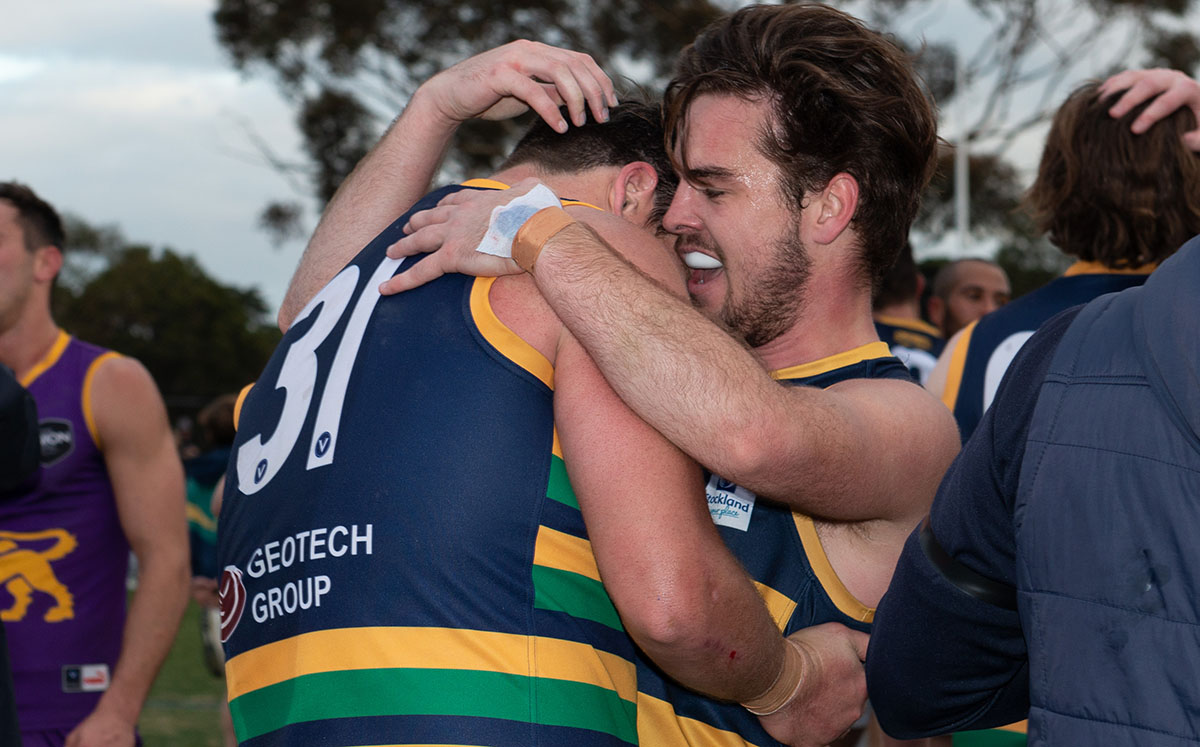 St Kevin’s OB became the first club since Collegians in 2011-12 to win back-to-back William Buck Premier flags after they defeated the Lions by five points in a thriller at Elsternwick Park on Sunday.

For the second time in as many years, SKOB held off a fast-finishing Lions outfit after they led by 31 points at the last break before Collegians rallied with five goals to one in a heart-stopping final term.

Billy Kanakis was instrumental to SKOB’s triumphant day out, booting five goals and taking home the Jock Nelson Medal as the best player on the ground. His elusive activity in the forward 50 is second-to-none and was showcased in its entirety in a three-goal match-winning second term.

Heading into the game, a question mark surrounding SKOB’s ability to claim their second-ever A-Grade/Premier flag was the inexperience of their youthful defence who were tasked with stopping players the ilk of Lachie Ferguson, Alex Croft, George Burbury and Will Johnson. While Ferguson kicked four goals and Burbury fought valiantly both up forward and through the midfield, it was Lachlan Farrugia, Cam Hodges, Conor Ross and Will Coates who shone for SKOB.

Farrugia, who is just 19 years old, stepped up in arguably the biggest game of his career and showcased a level of poise far beyond his years. He was a main catalyst to SKOB’s flawless release from the defensive 50 whereby they used overlap handball to run the ball and continually give their forwards opportunities on goal.

Lachlan Sullivan, Gerard Gleeson and Nick Wood starred through the SKOB midfield, with Sullivan polling second in the Jock Nelson Medal voting. Ned Reeves and Anthony Lynch combined for a dominant ruck display, with Lynch winning even more admirers for his exhibition of passion and courage.

His performance warrants a story unto itself as the VAFA champion battled pneumonia in an act not too dissimilar to Robert DiPierdomenico’s punctured lung in the 1989 VFL Grand Final. As he continues to recover in hospital, we can only admire a player who has given SKOB so much both on and off the field, with this performance arguably his greatest in a career spanning more than 250 games.

From a Collegians perspective, one from outside the four walls of the club cannot presume to know the disappointment felt after falling short by less than a goal for the second year in a row.

Sam Hibbins continued to etch his name onto the list of big game players with a dominant display, winning contested possessions, clearances and marks for the full four quarters. His desperation at the contest resulted in more than one of the Lions’ goals, while Lachie Ferguson stood up with four of his own. Burbury’s fight until the final siren was evident after his move into the midfield, willing himself to every contest and continually pumping the ball forward of centre.

Fraser Cameron showed why he played just seven matches due to VFL commitments with a bevy of disposals across half back, while Viv Michie continued the elite form that saw him poll 17 votes and finish third in this year’s Woodrow Medal.

The finale completed a sensational season of William Buck Premier football as the standard of our competition continues to grow year-on-year. They were the two best sides in one of the great finishes and we congratulate both teams on their performances in 2018.