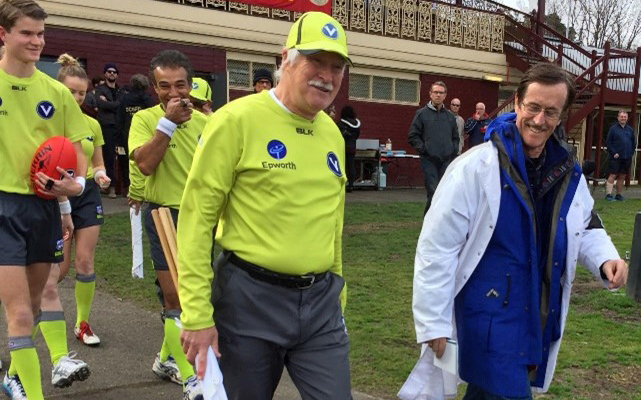 Last week, we delivered the remarkable news of both Anthony Simpson & Brendan Corcoran each reaching their 550-game milestones as VAFA umpires. Well, there’s something in the UA water because David Hindle just became the third umpire this year to notch game 550 over the weekend after umpiring his first game back in 1969!

The UA recently caught up with David about his sensational career:

When did you start umpiring in the VAFA?

I umpired my first VAFA game, as a field umpire, on 19 April 1969 between Old Paradians and Caulfield Grammarians Reserves, my fee received was $11. We have come a long way since then. I was a field umpire from then until 1983 and did 284 games. I resumed my career as a goal umpire in 2007, after Kevin “Chillie” Segota suggested that I should take on goal umpiring.

What are your career highlights?

What keeps you umpiring?

I have kept umpiring because I enjoy the mateship of my fellow umpires, the acceptance of the umpires by the clubs during and after matches.

Why should people get involved in umpiring with the VAFA?

For young people with ambition, the VAFA can be a great steppingstone to the VFL/AFL and we have many examples of former VAFA umpires who have risen to great heights in those leagues.