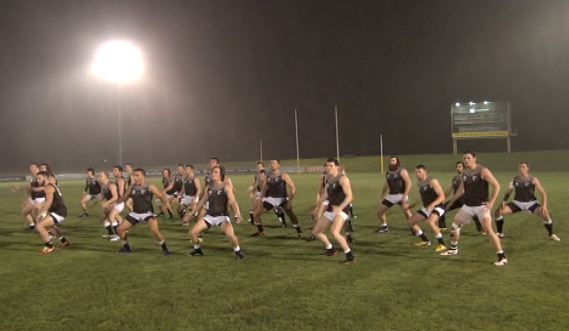 The New Zealand Hawks warmed up for the 2014 International Cup with a win over VAFA Premier C side Ormond at Sportscover Arena last night.
In ugly conditions with squally rain regularly sweeping across Elsternwick Park, the Hawks won 6.16.52 to Ormond’s 3.2.20.
With the New Zealand side landing earlier that morning after a 3am start for more than half the squad, it was a great chance to blow out a few cobwebs before their first pool match the International Cup when they take on Sweden on Sunday.
For the inexperienced Ormond side, many of the players were thrilled at the chance to play in an ‘international match’. Ormond were certainly not at full strength, nevertheless, for their younger players the chance to stand opposite the Haka (watch the Hawks do the Haka pregame below) and play under lights against international opposition was a thrill.
There will be full coverage of the match in next week’s edition of VAFA TV. Whilst it was only a practice match, there crowd was reasonable large and credit must go to Ormond who had played a large part in organising the night. The crowd also contained a few spies as most of the Canadian team were present to see what the Kiwis could do on the field.
There are a number of VAFA players playing in the International Cup in the various teams, last night’s New Zealand side included their skipper Andy Howison of  and Justin Clarke both of Collegians.
A number of VAFA clubs have aligned themselves with the various international teams in town for the Cup. These teams will be training at VAFA venues over the coming weeks and both Box Hill North and Manningham Cobras have been fortunate enough to be selected as host clubs for the Community Round of the International Cup on Saturday 16 August.
Box Hill North are hosting the match between Japan and Tonga as a curtain raiser to their senior match against Hawthorn in Division 4.
Manningham Cobras are hosting Fiji and Great Britain as the curtain raiser for their Round 17 match against Dragons also in Division 4.
You can read more about the International Cup here.