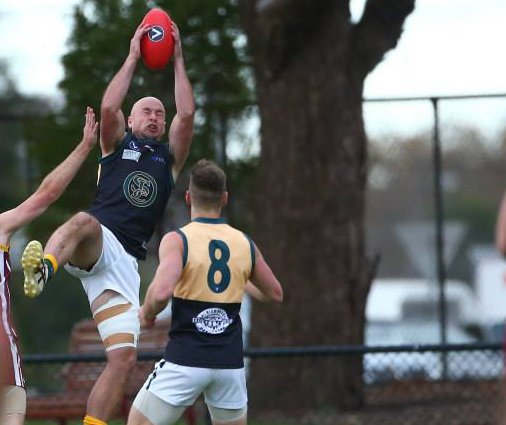 Round 4 saw the promoted sides showing they are forces to be reckoned with and St Johns OC proved themselves worthy in the highly-anticipated match-up between two undefeated sides.

Emmaus St Leo’s recorded their second win in as many weeks as they defeated Eltham Collegians AFC by 30 points at Bennettswood Sports Ground. The Animals started the strongest as they kicked 7.3 to Eltham Collegians’ 2.1 to lead by 32 points at the first change. The Animals could not maintain the momentum in the second quarter as they allowed Eltham Collegians to reduce the margin to 14 points on the back of a four-goal quarter. But following the half time break, Emmaus St Leo’s dominated the Turtles, as the strength of their seven-goal to one third quarter pushed the margin out to 58 points. Eltham Collegians tried their hardest to steal the match in the last quarter, but could only reduce the final margin to 30 points. Sean Drummond was the best on ground for the Animals as Thomas Birkett put through five majors. For the Turtles, Benjamin Gill put through four goals as he was named their best on ground and Bryan Galvan also added five goals.

In a top-of-the-table battle, St Johns OC inflicted the first defeat on the Preston Bullants for the season, claiming a 32-point victory at Thomas Carroll Reserve. The JOC’s took the ascendency from the first bounce as they held Preston goalless to lead by 30 points at quarter time. The game tightened up in the second quarter as both sides put three goals apiece on the scoreboard as the Bullants reduced the margin to 29 points at the half time break. St Johns added five more goals after the break to Preston’s three to take a 41-point lead into the final quarter. The final quarter was high scoring as both teams combined for nine goals, as Preston was only able to reduce the final margin to 30 points. Aaron Thornton added eight goals to improve his season total to 20 for St Johns OC, while Anthony Brannan was named best on ground. Andre Marcon was named the best for Preston, as Damon Marcon, Samual Fleming and Liam Carter kicked two goals each.

Returning from the bye, Bulleen/Templestowe registered their first win since Round 1 as they defeated the winless Richmond Central by 20 points at Ted Ajani Reserve. The Bullants started stronger than the Snakes as they led at the first change by 27 points. In the second quarter, Richmond Central had six scoring shots to Bulleen/Templestowe’s five but inaccuracy cost the Snakes as the margin moved out to 31 points at the half time. Richmond Central continued to put shots on goal and again had more shots than the Bullants in the third but only reduced the deficit to 26 points at the three quarter time. With the opportunity to close out their second win of the season, Bulleen/Templestowe were held to 1.1 in the final quarter but again the inaccurate Snakes with 1.3 were unable to take advantage as they fell by 20 points. Brodie Mclaughlin was the best on the ground for the Bullants as Billy Wilson, Anthony Lucisano, Alan Hodges and Chris Galapi kicked two goals each. Karl Schoenmaekers was the Snakes best, as Ricky Costanzo was the leading goal kicker on the ground with three.

West Brunswick firmed in the top half of the table with their third victory in a row as they defeat MHSOB by 23 points at Ransford Oval. The Westies provedthey were in-form, as they held MHSOB to one behind as they kicked 2.5 themselves to lead by 16 points at quarter time. Inaccuracy in the second quarter for the Magpies allowed the Unicorns back in the game as the margin was reduced to seven at the half time break. West Brunswick returned from the half time break firing as they put on six goals to MHSOB’s one to blow the margin to 38 points at the final change. Inaccuracy hurt both sides in the final quarter and cost the Unicorns the opportunity to steal the game. MHSOB kicked 3.8 in the final term to West Brunswick’s 1.5 as the final margin was reduced to 23 points at the final siren. Chris Germon continued his strong form this season with a best on ground performance, with Dylan Muscat added three goals for the Magpies. Andrew Villani was the Unicorns best and Kane Smith was their only multiple goal kicker with two.

Round 5 sees Yarra Valley OB returning from the bye to host Richmond Central, who will be chasing their first win of the season. Top of the ladder St Johns OC will travel to Bennettswood Sports Ground to take on the inform Emmaus St Leos, who will be chasing their third win in a row. MHSOB after two losses in a row return home to face the winless Eltham Collegians at Melbourne High School as both sides want to break losing streaks. The final game of the round sees West Brunswick hosting Bulleen/Templestowe as a win for either would hold them strongly in the top four. Preston Bullants get the chance to regroup after their first loss of the season with the bye.