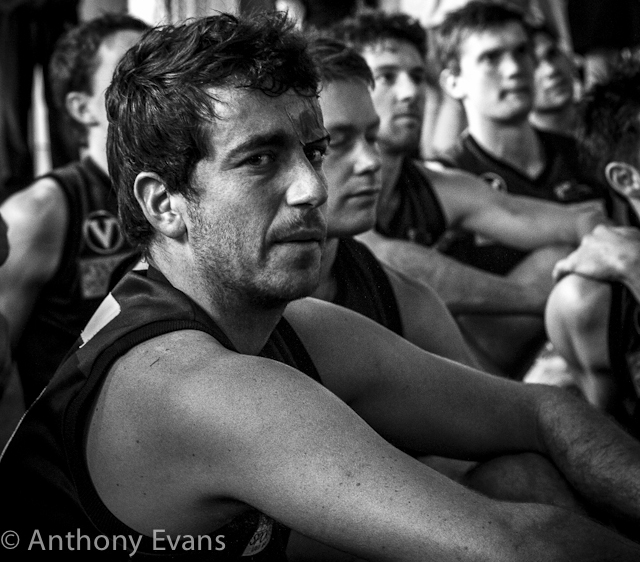 Embodying the VAFA’s core values and beliefs of integrity, respect and playing for the love of the game as well as any player within the Association, 30-year-old Lacey concludes his career with the wellbeing of his family and beloved Blacks at the forefront of his decision.

“I’ve probably reached the point where I can’t really commit the time to play at the level I want to play,” Lacey says.

“I’ve had a little baby girl four months ago and obviously that was on the cards from well and truly the end of last year. I just can’t see myself playing socially if I can’t commit to it fully and do all the training and give myself every chance to play well on a Saturday.”

Lacey says his body played no real part in his decision to hang up the boots after enduring a charmed run with injury throughout the entirety of his playing days.

“I’m actually almost embarrassed to say I’ve never had a soft tissue injury, ever,” he says.

“Other than just the normal wear and tear, my ankles are pretty busted up but I’ve got no really good reason to physically stop playing, it’s just sort of mentally the end of the road I think.”

One could not blame a man who has devoted more than 200 games of senior football to two clubs over a 12-year period.

At the conclusion of his schooling and playing days at Melbourne Grammar, Lacey played a full year in the TAC Cup before making the decision to join his friends at Old Melburnians.

“I had a full year to have a real crack at the TAC Cup and played the year at Sandy, and then I got to the end of that year and I was pretty realistic that I was really no chance to get drafted,” he says.

“I had a lot of mates at the OMs and I probably knew deep down I was never going to play at the highest level so I thought look I’m just going to call it and go and play with my mates.”

Debuting for the OMs in 2004’s A-Section, Lacey spent three years honing his skills and sharpening his abilities as he indulged in the experiences of a number of club legends.

“I had three years there which I really enjoyed, I absolutely loved it,” he says.

“We were in A-Grade at that time and some absolute champion players were playing at the OMs like Toby Roberts and James Beaumont – you know some real champions of that club. I learnt a lot from all those guys.”

It was throughout that period of time Lacey’s own game began to improve astronomically and to the point he was selected for the first of four straight years in the VAFA U23 representative side, where he was named AAFC All-Australian twice and Big V captain in 2008.

His first tour to Western Australia paid immediate dividends for the talented young star, earning his first selection in the AAFC All-Australian team and being rewarded with the opportunity to travel to Ireland to face the All-Ireland team at Croke Park.

“It was the first time the VAFA had done that and that trip was the trip of a lifetime,” Lacey says.

“You can imagine I was a 19-year-old bloke and had really only ever been overseas once on a school trip so that was just incredible. We got thumped but it was just incredible to play on Croke Park and play against some of the best players from Ireland.

At the end of 2006, and while vice-captain of Old Melburnians, Lacey made the difficult decision to leave OMs and join a number of his university friends, as well as his brother-in-law, at University Blacks.

“It was a big move but at the time it sort of felt like the right decision, and in hindsight it certainly was,” he says.

As challenging a decision it was to leave close mates at Old Melburnians, the move reaped instant reward as Lacey and his Blacks teammates made an unlikely grand final appearance and earnt promotion to A-Section the following year.

“We played finals but we were probably the third best side,” he says.

“St Bedes/Mentone – the side when ended up winning A the next year – were the best side by a fair bit and the Old Essendon who had beaten us by 10 goals twice during the year.”

Coming up against the same Old Essendon squad who had made light work of the Blacks on both occasions throughout the home and away season, Lacey and the Blacks were not considered a chance in the lead-up to their preliminary final clash in 2007.

Down by eight goals at the half time break, and with no real advantage at a hot and windy Elsternwick Park, the Blacks rallied in the final two quarters to run over the top of their opponents and enter A-Section for the first time in decades.

“In terms of my whole career, that almost stands out as the most amazing win we’ve had,” Lacey says.

“There was just something about it, we really had no right to win the game, they (Old Essendon) were probably a superior club to us in most ways.

Lacey believes the incredible come-from-behind win and subsequent elevation to A-Section was just reward for a number of Blacks stalwarts who were at the end of their own careers.

“They almost saw it was like they’d started off the dream of getting the Blacks to A-Grade, then we won that prelim and they’d kind of achieved their dream. To be a part of that was incredible.”

“Safe to say the Clyde Hotel was absolutely pumping that night. Even though we had another game to play I reckon blokes were getting home around 6am even though they were playing a grand final in six days times. It was great, it was an amazing memory.”

Despite the emotional preliminary final win in 2007, the Blacks were unable to back up the following week as the Luke Beveridge-led St Bedes/Mentone Tigers defeated them by 13 points in the grand final.

However, it would take just five more years before the Blacks next tasted premiership success. After falling back to B-Section, the Blacks returned to A-Section on the back of a 27-point grand final win against Beaumaris in 2012, before finally tasting the ultimate success two years later.

“The really standout days were obviously the two flags in 2012 in B-Grade and obviously 2014 last year winning the A-Grade flag, which is obviously the pinnacle,” Lacey says.

“I just sort of remember when I was at OMs as a young bloke and looking at guys like Tim Ockleshaw of the Old Xavs and these sorts of guys and just thinking they were just unbelievable as A-Grade premiership players.

“And I guess to kind of get to there, and I would never compare myself to Old Xavs guys who won five or six flags, but to win an A-Grade flag was such an amazing achievement.”

When comparing his two premierships with the preliminary final victory in 2007, Lacey remembers two separate feelings of happiness at the conclusion of each match.

“I think both of those premierships were about relief in a way,” he says.

“I feel like at the siren of both of those games I was just too tired and too relieved to really celebrate that much. Thank god we’d done it.”

“That game in 2007 when we won that prelim, which as I said we really had no right to do, and got back to A-Grade with Blacks; in terms of feelings after the siren of just pure elation I think that’s probably the one I will remember the most.”

Now his career is officially at a close, the talented and ever-humble Lacey says the allure of match payments never played a part in his decision making throughout his footballing life.

“The VAFA is such an incredible competition, the standard of footy is so good, the blokes who you play with are just amazing and I think that ultimately it’s more than just about three hours from 2pm until 5pm, I think that’s why I love the VAFA so much.

“I’ve made a network, both at OMs and at the Uni Blacks, that I think will really set me up and I will have with me for my whole life.

With his wife and parents all involved at the Blacks, Lacey insists the Association and its clubs provide life experiences and moments money cannot buy.

“I guess that real involvement, not just from a footy sense but the whole of life perspective, I think that’s something the VAFA offers that you can’t get elsewhere.”

“I feel like if footy is just about from 2pm until 5pm it’s too hard. You’ve got to enjoy it outside of the game and I think the VAFA gives you the best opportunity to do that. It’s just a really great family atmosphere and certainly at the Uni Blacks they have that.”

With Saturdays and training nights free in his calendar from here on out, Lacey looks forward to his next challenge – slapping the sneakers on and running the 42km Berlin marathon.

“I’ve been talking about it for a while, but I’ve always wanted to run a marathon,” he says.

“I’ve actually entered the ballet which is in September next year so I won’t know until maybe December whether I’ve got a spot or not, but the plan is just have a crack at running a marathon and I thought well I might as well go over to Berlin to do it.”

On the back of everything he has achieved during his tenure in the VAFA, who are we to doubt a champion so talented and dedicated?