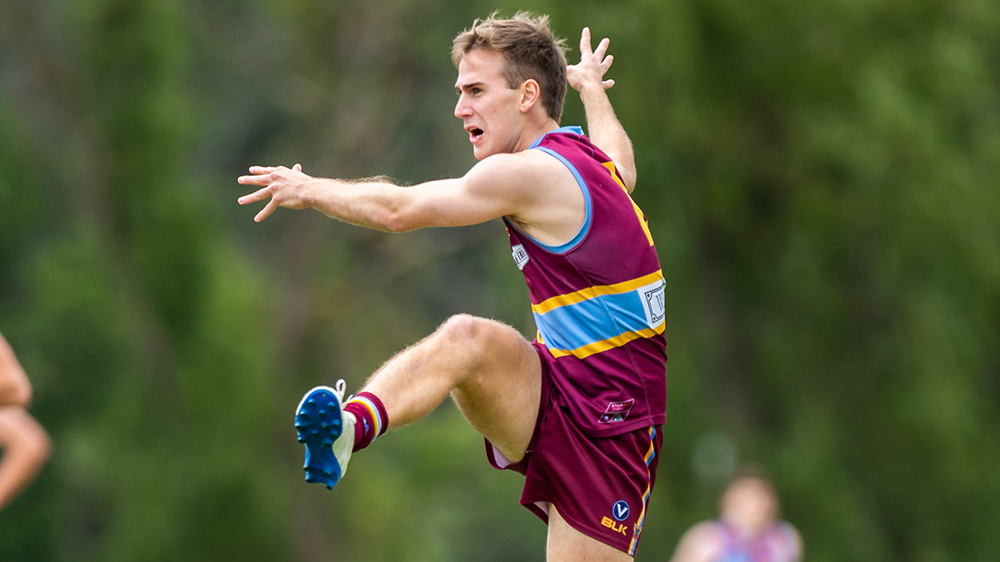 Hampton walked away 78-point winners against Preston. After the Bullants were only trailing by 13 at QT, 8.4 to 0.1 favouring the Rovers in the second quarter put the game away. Nathan Smith put on a display for the ages, rotating through the middle kicking eight goals in a best on ground display (taking his tally to 20 for the season) which was only complemented by Max Coughlin who kicked five (17 on the season). Christian Carnovale and Chris Perkins, who along with Smith, have been part of the best midfield in the league and were once again in the best. The Rovers are now the best offensive team in the competition averaging 125 points a game. Preston will be happy with three goals from Matthew Perazzola and a terrific senior debut from Thomas Boddy. However, alarm bells are starting to ring for the 0-5 Bullants who will host Mazenod this week. Hampton will look to continue their dominance when they host Old Mentonians.

The horror season for UHS-VU continued as they were defeated by Mazenod by 121 points at Central Reserve. A seven-goal to none first quarter from the Nodders set the tone who held the Vultures to one goal after three quarters. Samuel Michael dominated out of the middle while small forward Matthew Fewings kicked seven in a best on ground performance. Ethan Clarke was the best in defence for the Vultures who are in desperate need of a win when they take on Old Ivanhoe at Brens Oval this week. The Nodders will travel to face Preston who will, much like UHS-VU, be fighting for that elusive first win of 2021.

Ormond got back on the winner’s list as they beat Old Ivanhoe by 16 points at Chelsworth Park. The Hoers were able to hold Ormond in the first, but behind the great play of Jackson Hille in the middle (who was awarded the Alan Redman Medal as the best on ground), it was the Monders who kicked away in the second kicking seven goals to one. The Hoers moved star forward Luke Velluto into the ruck to start the second half and the game shifted. Down by four goals entering the last quarter, the Hoers piled them on and got within four points, however, timely goals from Joe Nowell and Henry Simon late put the game away. Jack McCartney and Max Kennedy were terrific in the midfield for the Monders, while Ben Oliver on the wing and off-season recruit Jaryd Robertson were terrific all day for the Hoers. Ormond will host Old Geelong in the important match-up of third vs fourth. Old Ivanhoe will expect to get this game back when they travel to face the winless UHS-VU.

In the battle of the undefeated, Monash showed their force beating Old Geelong by 49 points at Como Park. Inaccurate kicking from both sides was the story of the first with the Blues not able to make the most of their chances but they still led by 19. The Oggers made a game of it in the second kicking four goals to two and only trailed by seven points at the half. From then on, it was all Monash to the tuned of 11 goals to five in the second half ending the Oggers undefeated streak and placing themselves as the firm premiership favourites early in the season. To no surprise, the midfield tandem of Scott Dixon and John Simson were prolific in defeat for Old Geelong while Josh Hutley impressed off half-back. Nick Argento continued his terrific form to start the season, while Beau Harris was an absolute bull in the middle all day for the Blues in a best on ground performance. Billy Robertson was once again in the best kicking four goals out of the midfield for the Blues. Monash will play Marcellin at home this week. Old Geelong will have another opportunity to get a statement win when they travel to face Ormond.

Marcellin completed a six-goal comeback in the second half to run over the top of Old Mentonians by 14 points. After a tight first quarter, Comrey Edgeworth was able to lead out of centre-half back to assist the Panthers kicking away in the second to the tune of six goals to three allowing Old Mentone a 30-point lead at the half. After the Panthers kicked the first in the third, it was all Marcellin as Jordan Perry (who kicked three on the day) took over in the midfield on route to a nine goals to two third quarter which gave the Eagles a 10-point lead at the final break. The fourth quarter was contested with neither team able to break away, but it was Mentone who kicked three of the first four tying the game at 95 apiece. Riding the wave of a miraculous stoppage goal from Jeremiah Antypas, the Eagles kicked the final two to close out the game. Marcellin will look to end Monash’s undefeated streak this week while the disappointed Panthers will have the tough task of containing Hampton’s fire powered offence.