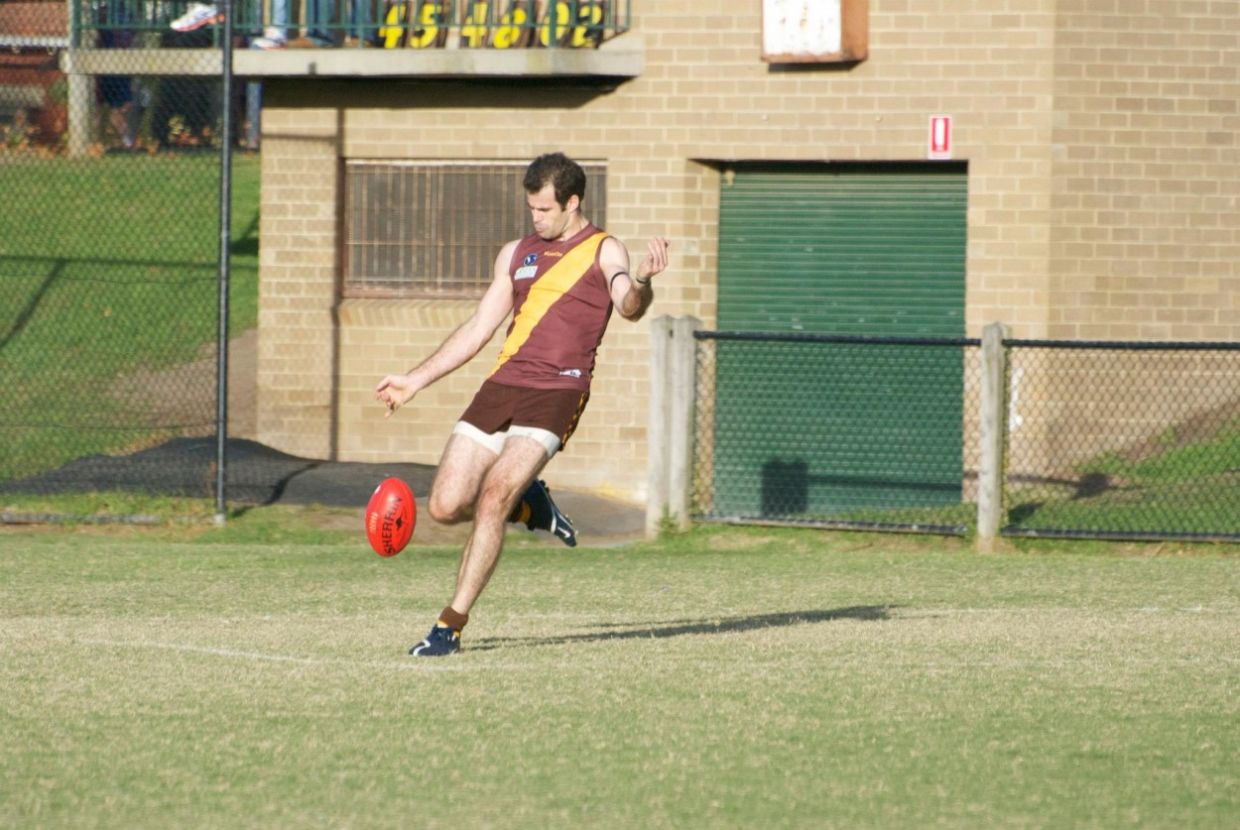 Glen Eira failed to score a goal for three quarters against a rampant Hampton Rovers in Division 1. The Rovers (5-0) did as they pleased in a wonderful performance that saw Mark Devereaux finish with seven goals and Ed Turner five in the 188 point win. The Saints (0-5), did manage to kick three goals in the last quarter.
Williamstown CYMS had a great 41 point win over an inconsistent Old Geelong. Both sides are now 2-3 but are only a game and percentage off second spot in the most even senior section in the league. Bulleen Templestowe (3-2) held on for an impressive seven point win at home over Ormond (2-3).
In the match of the round it was the super impressive Whitefriars who won at Toorak Park against Prahran Assumption by 21 points. Both sides are 3 wins and two losses with percentage putting the Two Blues in second and Whitefriars third. In the final match Old Mentonians (3-2) defeated MHSOB (2-3) by a comfortable 74 points.
In Division 2 it was kissing your sister territory and as Old Paradians said on Twitter, no one sung the song.  Paradians (1-1-3) and Emmaus St Leo’s (0-1-4) played out the season’s first draw. The Bulldogs had more scoring chances but should take the positives that they no longer have a donut in the points column on the ladder.  Yarra Valley (3-2) knocked off the previously undefeated Old Eltham (4-1) by four goals. Monash Gryphons surprised Ivanhoe with a six goal win.  Both sides are locked at two wins and three losses after five rounds. St Mary’s Salesian were able to breath easy in the final minutes of a game for the first time in four weeks. The Saints (4-1) held off South Melbourne Districts by 22 points. Jarrod Bannister kicked a lay eight goals for Therry Penola (4-1) who stormed to the top of the ladder after beating St John’s (2-3) by five goals.
It’s a four way tie at the top in Division 3, but it is Kew (4-1) who lead the pack courtesy of their 59 point win over Power House (1-4). UHS-VU (4-1) are one of the teams in hot pursuit as they came back from South Mornington (1-4) with the goodies.
Albert Park (2-3) beat up on Old Westbourne who remain winless in 2013. The Falcons recording a 58 point win to be a game outside the six. Richmond Central (4-1) made a significant statement, kicking 28 goals in their 119 point win over Aquinas (3-2). Five goal hauls to Luke Carland and Nick Cannon the high points of the 12 Snakes who got on the scoresheet. Elsternwick (4-1) are the other team in that top bracket after they handed St Francis Xavier (2-3) a 47 point loss. Aaron Thornton (6 goals) and Justin Hunter (5) were the major goalkickers for the Wicks’ who are four wins from five. The close one of the section was the University battle between La Trobe and Swinburne. La Trobe University (2-3) held off a fast finishing Swinburne Uni (3-2) to win by 3 points.
Division 4 had it’s first shock of the year when Point Cook suffered their first loss of the campaign on their travels to West Brunswick. The Magpies recorded a 13 point win and joined the Bulldogs on three wins and one loss, both sides have had a bye.
Hawthorn (4-1) continued to state their intentions by defeating a flat Box Hill North (1-4) by 132 points. Justin Rossoukas kicked nine goals and Nick Brown five as the Hawks move into second spot. They trail Eley Park Sharks who had a good win over Mt Lilydale in a highy entertaining game. The Sharks (4-0-Bye) had to come from behind a couple of times before winning by 32 points. North Brunswick (2-3) handed Manningham Cobras (1-3-bye) another huge loss. The Bulls fell one shy of a triple figure margin. Oscar Baring, Pat Notaro and Ben Gallagher each kicked five goals in the win. Northern Blues won their second game of the year over Chadstone by 34 points. Chadtstone (0-5) again led at half time but couldn’t sustain it as the Blues (2-3) kicked 10 goals to five in the second half.