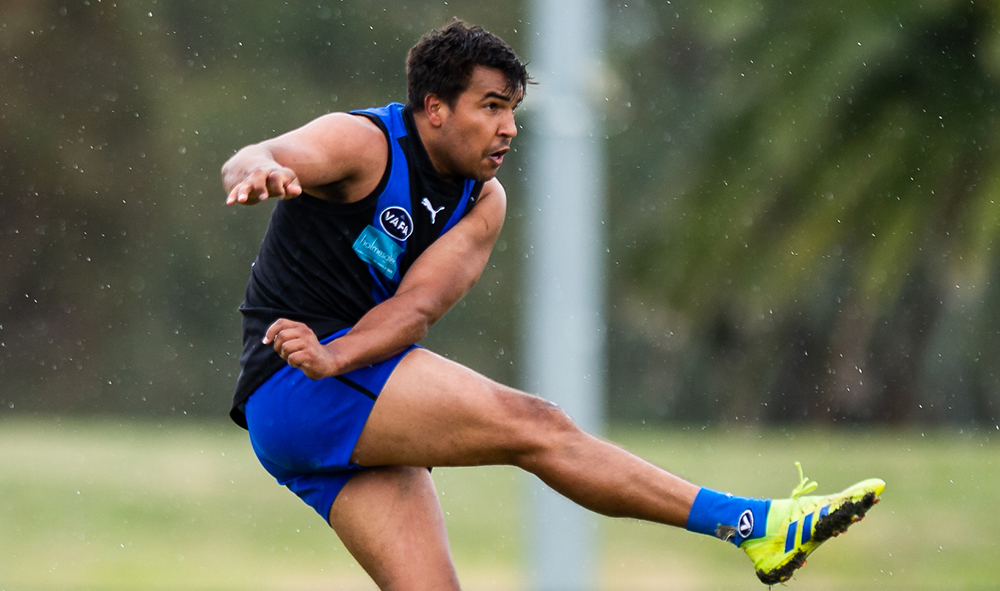 Rumble in the Toorak Jungle as Xavs meet Blues

The VAFA Match of the Round on RSN Carnival will cover the heavyweight bout between Old Xaverians and University Blues at Toorak Park. Xavs will enter the match as slight favourites after they defeated St Kevin’s OB by 71 points in a dominant display at TH King Oval. Julian Soccio, who was outstanding one week earlier against Scotch, kicked three goals as did the ever-dangerous Denis Symeopoulos. Marcus Stavrou was BOG and is one of the form midfielders of the competition three rounds in. As for the Blues, the secured their second win against Old Melburnians and it was the usual suspects of Cameron O’Shea, Ayce Cordy and Ben Capra who led from the front. This clash is as mouth-watering as any this year with Ayce vs Holmes, Capra vs Bewick (maybe) and Grimley vs Shoenmakers. Tune into RSN Carnival from 1pm for the Saturday Warm-Up before the MOTR broadcast at 2pm.

Collegians will look to maintain their strong Round 3 form when they host Old Brighton at Harry Trott Oval. It was a must-win for the Lions on Saturday, and they prevailed over a gallant Old Scotch by 33 points. Josh Watson debuted for the Lions with 25 disposals, nine tackles and three goals to earn himself the Mecwacare Men’s Rising Star nomination, while Hugh Johnson (3), Ollie Jackson (2) and Dave Mirra (2) were a constant threat up forward. Old Brighton, who sit second on the ladder, were too strong for Caulfield Grammarians and it was Harry Hill and Nick Pavlou who once again starred through the midfield. The midfield battle of Hill, Pavlou, and Fisher against Michie, Sheridan and Boucher will go a long way to deciding this one, as will Verney vs Mirra if the key Lion spends the game up forward again.

One of either Old Trinity or Caulfield Grammarians will claim their first win of 2021 when the two meet at the Daley Oval this weekend. The Fields, in particular, have had a tough opening three rounds against Uni Blues, Old Melburnians and Old Brighton. Julian Dobosz had his best outing for the year against the Tonners with three goals, while Angus Cameron found plenty of it. Brett Eddy also had a season-high two over the weekend, giving the T’s key defenders two talls to worry about. Alex Emery has been in outstanding form for the T’s over the past two weeks with his standout performance against OMs in the R2 Friday night clash backed up with a BOG display against the Snow Dogs.

St Kevin’s OB will be looking to bounce back after a disappointing showing against Old Xavs when they travel to Macqueen Park and take on the Scotchies. Following their 3.9 (27) over the weekend, they now have the lowest points for of any side, something we can expect the likes of Tom Boyd, Billy Kanakis and Shaun Kennedy to rectify as the key targets up forward. Scotch were impressive for three quarters against the Lions but ran out of steam (and men) with Gene Van Den Broek, Sam Dawborn, Josh Halsall and Matthew Seed failing to see out the game due to injury. They will be seriously buoyed by Will Carrington’s effort on Dave Mirra as well as Mack Rivett’s dominant first half.

After suffering their first loss of the season to Uni Blues, Old Melburnians will hope to get back on the winners list against St Bernard’s at EP.  Ed Nichols would be leading OM’s B&F with nearly every vote on offer after another remarkable outing over the weekend that included three goals, while George Hurley-Wellington also continued his hot form. The fourth-placed St Bernard’s, who sit above both Uni Blues and SKOB, continue to impress despite the youthful age of their playing group. They ran out 50-point winners over Old Trinity and it was Darren Colaco who starred with five goals. Jarrod Walters, 22, and Ben Overman, 20, were the Bernie’s best.