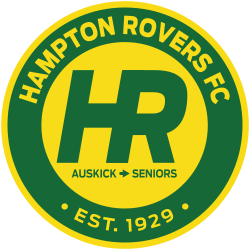 Hampton Rovers are one of the VAFA’s traditional clubs, commencing in the competition in 1933. Whilst the early years garnered slow progress, a first senior premiership in 1939 was a sign of things to come. After the Second World War, the resumption of competition saw Rovers win C Section in 1946 and B Section in 1947. With the war taking out seasons1940-45, Rovers had won three premierships in a row to climb to the top section of the VAFA. During this period Rovers produced some of the VAFA’s greatest players; Big V Club Champions Doug Arnold and Sam Birtles were members of the Rovers side in this period, and in 1951, the club claimed their first and to this stage, only A Section premiership. Whilst there were premierships at junior and reserve level, that A Section flag was the start of a drought for Rovers at Senior level. The drought breaker came 44 years later when the club were back in D Section. The club has found new strength in recent years, highlighted by their recent back to back premierships in 2013-14. With a strong junior club (playing in the SMJFL) and playing their home games on one of the finest surfaces in the VAFA (Boss James Reserve), Hampton Rovers could be on track to repeat the efforts of that team of 1951. They bounced back from double relegation in 2016-17 with a grand final appearance against Ormond in Division 1 of 2018, earning promotion back into Premier C. In 2017, the Rovers celebrated being a part of the inaugural VAFA women’s competition with the first-ever game against Ormond under lights at Boss James Reserve.

The VAFA congratulates Dillon Melnjak from Hampton Rovers who has been named thi...read more

Congratulations to Hampton Rovers defender, Sarah Cleary, who was named the Week...read more

Shem Curry with the clutch game-winner

Old Scotch website after their 22-point loss to Beaumaris The Cards were ba...read more

What your club said this week

Welcome to the Premier B Season for 2015! If you believe the hype and noise out ...read more