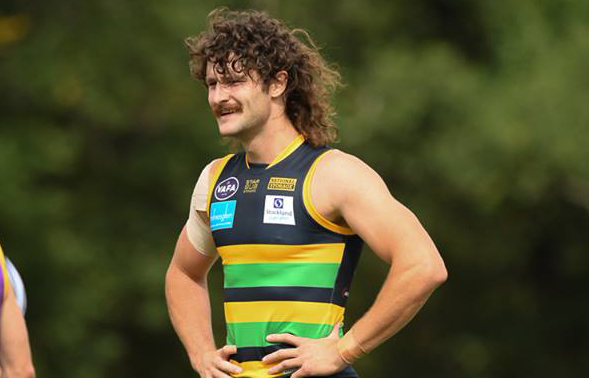 It was simply a matter of time before St Kevin’s OB reclaimed their king-slaying ways and last weekend’s 19-point victory over University Blues presented a firm reminder of their ability to cover personnel losses no matter how big, how small or how many. While they lost Anthony Lynch, Conor Ross, Cam Hodges, Ethan Phillips, Henry Parkes and Lachie Sullivan, SKOB welcomed back Sam Critchley, Sam Barnett, John Wood and Zach Ginies. For more than two years, SKOB has led the competition with their coverage of week-to-week losses due to depth of talent and structures that continually hold up irrespective of who’s playing. This week, it was Jack Holden who took the lead as he collected 32 disposals and kicked two goals. Holden missed last year’s grand final due to injury but his influence far exceeds his possession-gathering ability, with eight inside 50’s showcasing his importance as a linkman between the midfield and forward line. Big V fullback, Will Coates, left the comfort of the defensive 50 as he was tasked with filling the ruck void left by Lynch and, rather incredibly, he registered 45 hit outs against the form ruckman of the competition. The Blues, who suffered their first loss of the season, entered the match without Jeremy Taylor, Ryan Eade and Kieran Harper while Hamish MacInnes suffered a knee injury throughout the game. Tom Young’s individual form is as strong as any player in William Buck Premier as he gathered 30 disposals and led the Blues’ possession count for the third time in the last four games. Their 75 points was a season-low after averaging 117 heading into Round 5.

It wasn’t pretty but Old Melburnians will certainly accept their 10-point win over St Bernard’s at the Snake Pit. Since suffering relegation from William Buck Premier at the end of 2016, the Snow Dogs had lost just three of their past 20 games at the Pit, but it mattered little as OM’s kicked seven of the first 10 goals to seal the game in a low-scoring affair. Jackson Paine returned from suspension with four goals and 20 disposals for OM’s, illustrating both his elite talent and the importance of Simon Caven to St Bernard’s line-up after the star defender broke his leg in Round 3. OM’s have now registered three wins away from home against Collegians, Carey & the Snow Dogs and need to ensure a return to form at EP against De La this weekend. The Snow Dogs had 60 more disposals than OM’s but missed opportunities through an uncharacteristic lack of composure when moving forward with just four marks inside 50. Adam Bentick and Chris Peart were instrumental through the midfield, however, the Snow Dogs continue to struggle in second halves having kicked just two goals over the past two games. As a side note, Alex McLeod’s star rose following his save of a toddler on the half-forward flank – do yourself a favour and watch the footage!

We knew Old Trinity weren’t far away and they officially kick-started their season with their first win, defeating Old Carey by 44 points at the Daley. It was a must-win for both sides but, after taking it up to SKOB for three quarters in Round 4, the T’s continued their improved form with the first eight scoring shots of the game. Brandon Wood’s inclusion from Richmond VFL has been of the utmost importance as he kicked four of his five goals in the opening half, while Harry Thompson was a monster across the ground en route to 24 disposals and two goals. Carey will be buoyed by the level of excellence produced from their young players; including, Cooper Leon, Oliver Dickson and Round 5 Rising Star nominee Oscar White. White debuted in Round 2’s grand final rematch against St Bernard’s with 17 disposals, accumulated 18 in Round 3 and returned to the line-up with 20 and eight marks on Saturday.

17 goals to four in the second and fourth terms proved the difference between Old Xaverians and Old Brighton, with the undefeated Xavs running out 86-point winners at Xavier College. Outside of those two quarters the goal differential was five to four, but it mattered little as Matt Margin and Tom Gilbert continued their outstanding form with four goals apiece. Marcus Stavrou set a competition record with 43 disposals as he eclipsed teammate Cauley Beetham who had another 34 after his 40 in Round 4. The Xavs are simply operating in another sphere at present and could not be better placed to make it two wins in a row at the Uni Oval after defeating the Blues in Round 15 last year. Eliot Le Grice and Nick Pavlou were the best of the Tonners after they suffered a multitude of outs prior to the match, including injuries to Michael Karayannis, Fraser Gregson and Ari Sakeson, while Anthony Zimmerman and Quintin Montanaro were called up to the VFL. Nonetheless, two quarters won’t beat any side in William Buck Premier so expect the Tonners to re-find their relentless aggression at home to Trinity this weekend.

It was the Viv Michie (32) and Sam Hibbins (30) show at Waverley Oval as the two Big V stars combined for 62 disposals during Collegians’ 73-point win over De La Salle. Nine goals to one in the opening half put the result beyond doubt as Hugh Johnson kicked a game-high four majors. The Lions’ radar may be skewed 33.62 in front of goal over the past three weeks, but they’ve now won two of their past three as they welcome talent back into the side each week. Losing Tom Humphrey to another calf injury in Round 4 was the worst possible result for De La as they battle injury and unavailability’s as much as any side. Jake Williams will return over the next few weeks but their next three games against OM’s, Blues and SKOB pose a real challenge for the injury-riddled outfit.