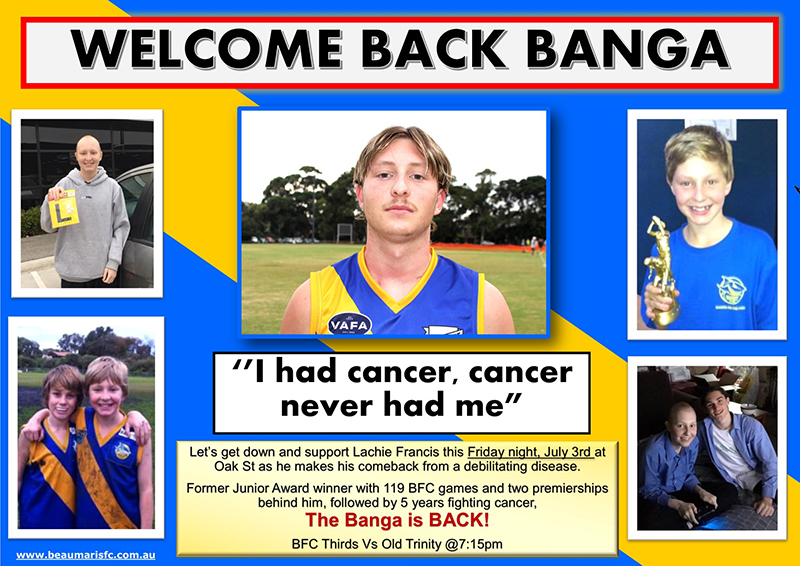 The Banga is back at Beaumaris

There’s rarely a shortage of inspirational and emotionally charged stories in the world of local football – and especially within the VAFA – but the story of Lachlan Francis is quite possibly where these tales peak.

At 7:15pm tonight, the feel-good story of the year will unfold at Banksia Reserve when ‘Banga’ returns to Shark Park after a four-year battle with leukaemia.

Yep, you read that right. Amazing.

The son of Mark (Thirds Coach) and Tracey (Club Secretary) received his cancer diagnosis when he was just 15yo and, after four years of treatment, was given the all-clear in 2020.

“Lachie has been doing footy training since October last year but hadn’t been given medical clearance to play,” Club President Terry Lucas said.

“He finally got the green light.”

Upon the news of Lachie’s return, the VAFA community rallied with their own messages of support:

Lachlan joined the Sharks when he was seven years old and played 119 games and won two premierships throughout his junior career.

Tonight, coached by his father, he will look to secure the Sharks’ first win of the Thirds Division 1 season against Old Trinity.

Good luck tonight, Banga. We’re all behind you.