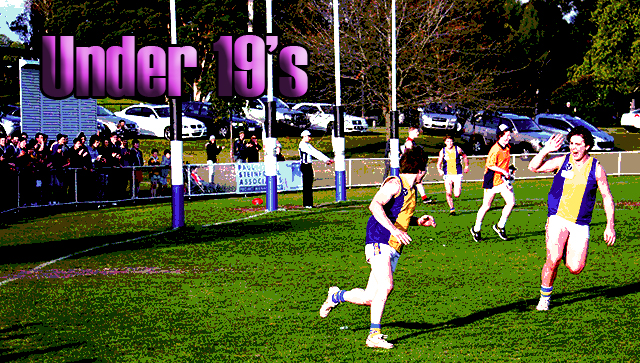 UNDER 19’s Preliminary Finals preview by Ray Leetham
PREMIER 19’s
St.Bedes, Mentone Tigers v St.Bernards
St. Bedes/Mentone Tigers were good last week against Old Xavierians but at this time of the year you need to be great to go further! St. Bernards won a tight one against the Skobbers and will need to give it everything and more in this last opportunity final. They will rely on Woods, Peart, Burgin and Cave to have an impact whereas St. Bedes are desperate to have another crack at Xavs. They will look to Denton, O’Kearne, Cross and Dalzotto to lead right from the first bounce. This will be a high standard game at Central Reserve.
On season form and depth of talent St. Bedes/Mentone should advance to the grand final.
SECTION 2
Werribee v Parkdale Vultures
Werribee were given a lesson in finals footy last week by Fitzroy and will be keen to have another crack at them next week. On their day Werribee are a capable side but they have not played their best football of late. They need Knezevic, Smith and Monk to have a big day on the park. Parkdale have the road trip and on form would have to lift up a gear to have any chance in this big game. Hendricks, Emmerson and Ballard are players that can change a game. If they lift, things may tilt Parkdale’s way but the task looks onerous. Parkdale should be confident as Werribee were kept to a low score last week. In a game like this, game plans can go out the window. Be desperate, win the contest and get the ball forward at every opportunity. This could become Parkdale’s only option, as Werribee, with finals experience on their side, will try to take control.

SECTION 3
Northern Blues V Whitefriars
The Northern Blues have been the form side of the competition all year but dropped the most important game of the season. AJAX took the chocolates in an upset win. The Blues will come out hard and rebound back into the Grand Final. Edwards, Hull and Jepson are players who are the key to their attack and if they can bring others into play it will be curtains for the Friars. I was on the Friars bangwagon last week and they came through well but this game is higher stakes against harder opposition. They will need Dinh, McGurgan,the “Baker” and Petts to play outside their comfort zone to have any chance of a grand final berth. The side that settles quicker and takes control will win. The Blues have the experience on the board to get over the line.