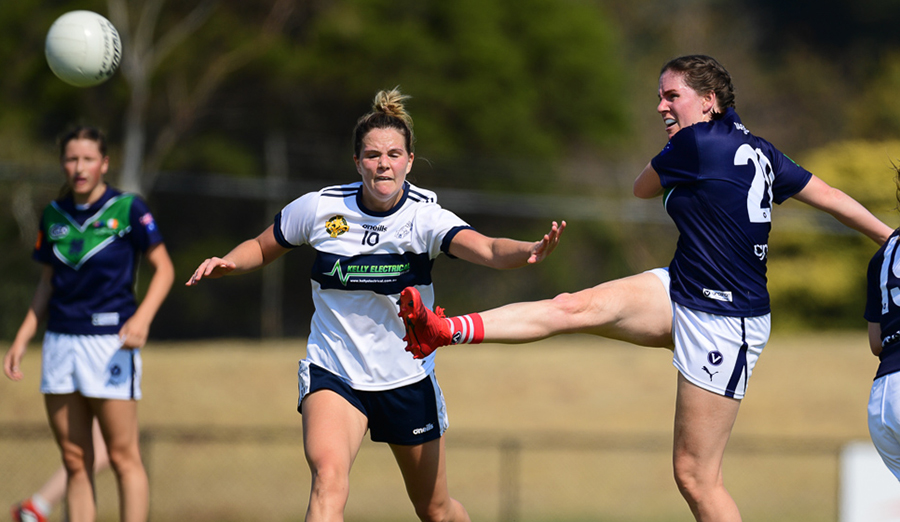 The VAFA’s exhibition of international rules football kick-started with the women taking on Victoria GAA on Saturday, going down by 11 points at Elsternwick Park.

It was a slow start from the VAFA as our girls adapted to the fast-paced nature of the hybrid game, but outstanding performances from Penny Brown (Hawthorn AFC), Michaela Harding (Kew), Charlotte Pooley (Collegians) and Hannah Elliot (CYs) helped claw the VAFA back into the game over the ensuing two terms.

During that time, the VAFA increased their pressure on the ball carrier with harder tackling, while moving the ball with quick hands and overlap out of defence.

The fitness of the VAFA was on show in the final term as we got within a goal, before a late under helped solidify the GAA’s hard-fought victory.

Ali Hynes (SKOB Saints) impressed through the ruck, while Sarah Kenny (West Brunswick) gave a selfless performance in goals late in the match.

Co-coach Dave Murray praised the players for how hard they worked for each other after first coming together as a team last week.

“A lot of the players found themselves in different roles to what they’d be used to at club level, but worked tirelessly as a team,” he said.

“They were brave, confident and aggressive, achieving an incredible amount over a short timeframe.”