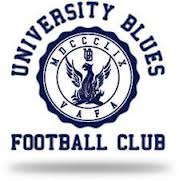 Certainly in the last 40 years, Blues have been the more successful of the two University clubs, although that success of being a permanent fixture in the top two sections of the VAFA is dampened somewhat by a lack of senior premierships. Blues ended a 15-year top section premiership drought behind them when they romped home for the William Buck Premier flag in 2019 in the same year ruckman and captain Ayce Cordy became the fifth player to win back-to-back Woodrow Medals. Blues have won only seven senior premierships since 1928, and have found themselves on the wrong side of the ledger on 15 occasions, 10 of those runners-up finishes in A or Premier Section.

Despite this, Blues are regular finalists and unlike their neighbours Blacks, they have won five underage titles as well as three Thirds or Club XVIII premierships.

Blues may have the names, but Jamo’s got the game

The final senior coaching appointment in William Buck Premier has been announced...read more

At the VAFA’s night of nights at the Crown River Room, the evening reached a c...read more

Cordy, Blues treating every game like ‘life or death’

The VAFA extends its deepest condolences to the family and friends of former Bi...read more

The VAFA extends its deepest condolences to the family and friends of Big V rep...read more