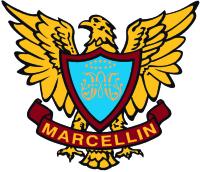 Marcellin Old Collegians commenced their time in the VAFA with a bang. Winning a premiership in F Section in their first year in the Association, the club then followed that up with back-to-back runners-up finishes before saluting in the 1974 C Section Grand Final. Four grand finals in four years was a terrific start and the club had progress to B Section. It was to get better, after narrowly missing the B Section finals in 1975, Marcellin duly won the 1976 B Section premiership. Thus within the space of six seasons, the Eagles had climbed five sections to reach A grade in time for the 1977 season. Simply phenomenal. They hung on for five years before an up and down between B and A in the second half of the 80’s, including the 1985 B Section flag rounded out an impressive first two decades in the competition. The lull of the early 1990s preceded the next meteoric rise of Marcellin that was book-ended by back to back premierships in C (1997) and B (1998) Sections and the ultimate prize of an A Section title in 2001. This was a super era for Marcellin as they produced multiple competition best and fairest winners and state players. This included five seasons (1998-2002) in a row where a Marcellin player won the section best and fairest medal. Another B Section flag came in 2008 before a tough three years that included a back-to-back relegation to Premier C. In 2017, Marcellin entered a team in the inaugural season of VAFA Women’s and, after taking out one of the two available pre-season Lightning Premierships, the Sheagles went on to claim the first-ever William Buck Premier flag under the guidance of Women’s Coach of the Year, Tom Stafford.

Congratulations to Marcellin's Bianca Keogh who has been named the Round 12 Anyt...read more

It was an unbelievably successful first year of VAFA Women's footy, and it ...read more

The VAFA congratulates Marcellin's Amber Micallef on her nomination as the Round...read more

Marcellin has announced, Glenn Cox, will continue in his role as senior coach in...read more

Huge congratulations to Marcellin winger, Annaleise Xanthos, who was named the R...read more