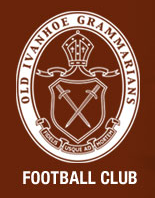 Old Ivanhoe Grammarians were admitted to the VAFA’s newly formed F Section in 1964 and managed to finish sixth of the eight teams that year. The following two seasons were more successful as the Hoes finished runner up both years to mak their way to D Section but the competition was more of a challenge. A further runner up finish and relegation occurred before the Hoes broke through for a first senior flag at E Section in 1973 – the reserves also won the flag this year. A further 14 years passed before the next senior triumph at Division 1 in 1987, however it was the mid 1990’s where the Hoes made their move. Back to Back premeirships at D Section (1994) and C Section (1995) had Old Ivanhoe in B Section for the first time. A one point loss in the closest ever B Section Grand Final to Marcellin was bittersweet as Old Ivanhoe were in A Grade for the first time. Their first season in the top flight was impressive, as they finished fifth. Relegation a year later was tempered by the club’s first B Section premiership in 2001. Another B Section flag in 2005, saw the Hoes spend four years in A Section, before the club slipped to Premier C where they managed to win the 2013 premiership upsetting favourites Mazenod.

As the lockdown in Victoria continues there'll be no VAFA football again this we...read more

Nick Armistead Rivalries can be built over years of intense competition or ...read more

The VAFA congratulates Cecilia Baldassarre who has been nominated as the Round 7...read more

WATCH: Mal Mitris’ goal after the siren with Titanic music

The last 60 seconds of Old Ivanhoe Grammarians's dramatic one-point after the ...read more